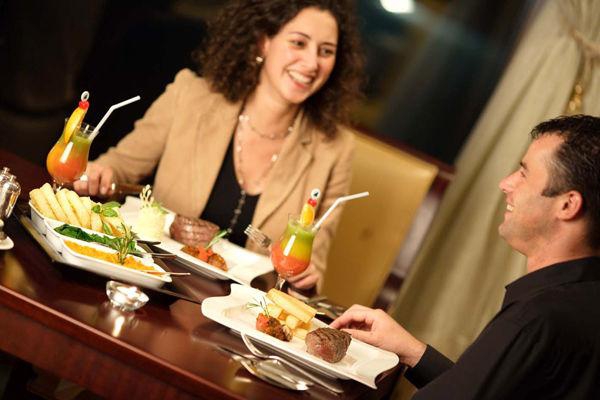 A wonderful setting sets the mood for a relaxing evening meal at Legends. The lush greens of the golf club one way and views over the Creek the other.

An 'earlybird' menu (dining before 2000hrs) was on offer, which consisted of three courses with half a bottle of house wine for 170dhs.

The menu choice was extensive in both starters and main courses. We opted for spiced crab cakes and a lobster bisque. Whilst we waited warm bread rolls arrived a melodic pianist filled the otherwise quiet restaurant. We were dining early at 1930, and most diners arrived after 2030, which is still early for Dubai.

Legends is well known for its steaks (having won various awards for best steakhouse and grill in Dubai). My dining partner enjoyed a 'melt in the mouth' fillet from NZ, accompanied with dauphinoise potatoes and a red wine sauce. Side orders of asparagus and spinach were the perfect accompanienment. I chose pink mullet and was delighted at its delicate flavour.

We could not resist the deserts and enjoyed in particular the apple crumble and cinnamon ice cream and almost as tasty was the tiramisu.

Meal for two, three courses and two glasses of wine was less than 400dhs. Staff were attentive but discreet, all in all a great meal at a mid-range price.